More female reporters should be given opportunities, Association for Women in Sports Media founders say 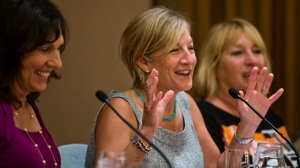 The “living, breathing Mt. Rushmore” of women in sports media celebrated 25 years of growth Friday at the Association for Women in Sports Media conference at the Montelucia Resort and Spa in Scottsdale while also looking forward to experiencing 25 more.

It all started with baseball player Dave Kingman sending a corsage box with a rat in it to Susan Fornoff in 1986 while she was in the press box. She found herself at the center of news stories at a time when women in sports media were rare, mentors were always men and there were no women’s rooms in press boxes.

Fornoff, Nancy Cooney, Kristin Huckshorn and Michele Himmelberg founded the organization soon after so women in sports media had a support system and an advocacy group to fight on their behalf.

“When the going gets tough, women form a club,” Huckshorn said. “That’s kind of the cliché.”

USA Today sports columnist Christine Brennan, the first AWSM president, led the four founders in a roundtable discussion about their own experiences in sports media in the early years and what women can do to further grow the number of women working in the business.

“Your best champion should be the women you work with,” said Himmelberg, who stressed that women shouldn’t be rivals but should rather promote other women’s work.

The group addressed the idea that sports editors blame the economy for not hiring women, but there are still white men being hired for those positions.

”Put pressure on the executive editors and managing editors,” Huckshorn said. “Say ‘Your numbers are terrible.’ They’re only going to listen to pressure from the top.”

Brennan said Title IX, which became law 41 years ago this week, will help increase that number as more and more young girls are growing up playing sports and will want to be involved in sports media as they grow older. She said realistically she’d like to see women compose a third of all sports writers 25 years from now and have an equal 50/50 split in 50 years.

“There are a lot of positives, but we’re not there yet.”

This entry was posted on June 23, 2013 by itsdifferentforgirls in Uncategorized.